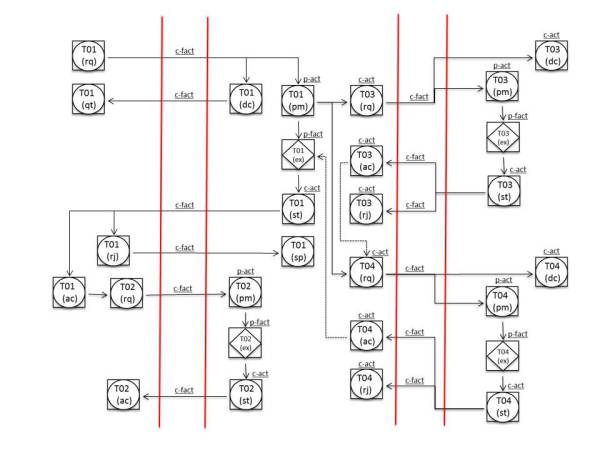 According to [1], a communication act is one that participants in transactions ‘enter into and comply with commitment towards each other regarding the performace of production acts’. Similarly a production act is the contibution by partcipants in a transaction to ‘bringing about the (delivery of) goods and/or services’. The c-facts and p-facts are the aggregate states of all such c-acts and p-acts in the operational universe of the organisation.

In this particular case in our DEMO analysis a transaction is not a representation of a single activity performed by the promise, but may incorporate the execution of more than one activity in the completion of the transaction. This can also be seen in the business process in Figure 2, in fact to emphasize this, the initial two activities can also be combined into a adhoc sub-process, and in this case it would also be more accurate from a BPM design perspective. The modification does not lead to any issues, but actually clarifies the role and transactions

Figure 3, shows this modified part of the altered business process. In Figure 2, we have (not entirely) mapped the c-acts, c-facts, p-acts and p-facts to their respective activities in the business process diagram. When it was done in glorious detail the picture was a huge mess of lines; it was re-drawn differently thus losing some of its detail, but hopefully gaining in readability!

The DEMO analysis helps us in identifying where to optimize the monitoring of the automated business process. It tells us that the time between a c-fact and the corresponding p-fact identifies delays in the process and their associated costs. Even though the c-act is considered as immaterial from an organizational revenue perspective, the corresponding c-fact is very important from this same perspective. As revenue generation is driven by the creation of (aggregate in the business process and not individual) p-facts in the enterprise, knowing these points and designing the business process around these increases the opportunities to improve the process over time.

September 7, 2021September 8, 2021How to Cross the chasm by co-creating the products with coMakeIT
co-Creation is the North Star and software is the New SunKiran Madhunapantula, COOOctober 11, 2018May 14, 2019

October 11, 2018May 14, 2019co-Creation is the North Star and software is the New Sun
Jumpstart, a proven methodology to create a Software FactoryJeyaganesh NarayanaswamySeptember 16, 2016January 8, 2019